The Return of the Sport

Canada calls on the MCM Oakville Seniors vs FC Interlaken 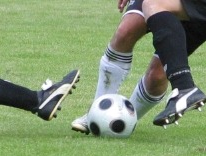 Manfred C. Muntwyler makes his return in Interlaken, where he attended school and was even then an avid footballer. He was a successful industrialist and founded 1975, Alfield Soccer Club. From the beginning the club played in the Halton Peel Senior soccer league.

An Over-30-League in southern Ontario. In 2004 the club change the name to Oakville MCM. The clubs four teams have had many travels over the years. In 1995 and 1998 it visited the mother country of football: England. 2000 and 2002 to Hungary. In 2005, went to the World Masters Games in Edmonton, Alberta Canada.  In 2006 they went to Charleston, South Carolina USA. Even today Muntwyler stands at the head of the association. Now come the Canadians to Muntwyler's home town. On Monday, 6 October, at 20.00 clock, they are against the seniors of FC Interlaken for a friendship game. An international delicacies that one should not miss. Oakville MCM travels not only with the team and families, but also with a camera team.

We have 13 guests and no members online