Final spurt with the Swiss

The FCI seniors proved to be good hosts. In the friendly game against Oakville MCM from Canada. Final score was 3-2 for Oakville MCM.

On Monday evening, the seniors of FC Interlaken took on the first team of Oakville MCM. Oakville have been the masters of the Halton Peel Senior soccer league for the past three years. A Over 30-League in southern Ontario, Canada. The contact between the clubs, Manfred C. Muntwyler, founder and president of MCM Oakville. Muntwyler, a native of Interlaken, returned last weekend for a reunion in his home and brought back his team. His team was a "multi-cultural troupe." "There are all Canadians, but with different countries of origin," explains Muntwyler. The club is like a family. Accordingly, it also makes common trips. 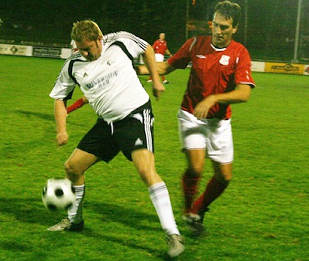 "Every two years we go on tour," says Muntwyler. "The journey to my home is the highlight so far." Muntwyler hopes for a return visit to Interlaken in Canada. "We would like to invite the team."

After the game was the big gift exchange announced. Especially the Canadians proved a lot of generosity. A few minutes after the whistle it was burning brightly in the FCI penalty and suddenly the ball was in the net. 0:1. Shortly after Pascal had Tschumi had a free kick chance. He fired the ball cleverly over the wall, but Gavin MacLeod in the Oakville gate and was able to come up with the save.

The Interlaken had more of the game and were technically adept. The Canadians played well but ambitious and fast. Impressively demonstrated during the 0:2. And Joey Bilotta ran with the ball at the foot of his enemies and rendered them in cold blood. As a result, the space men always continue on. The ideal opportunity to connect offered Tschumi. After a foul in the penalty area the referee pointed to the penalty spot. The striker took two steps and fired the ball into the back of the net. 2:1. Shortly afterwards Oakville went two goals ahead again. Again with a quick counter.

"If the game was a few minutes longer, things might of been different ," said Muntwyler after the game. "We did well to get this victory, and this gives us momentum for the next four games of the trip." This will take place in Geneva. The whole journey will be covered by a Canadian camera crew which will produce a half-hour broadcast for "Goal TV".

Only the school is gone

For Muntwyler it was a return to his old hometown success. For six months we looked forward to this visit and the expectations were fulfilled. "The people have been very good to us. Everything is right.

We have 12 guests and no members online